Spring into action With Three Great Events This May! 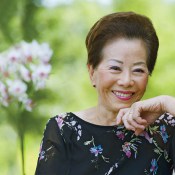 One of China’s most prolific – not to mention, widely read and respected – authors, Lihua O’Leary used to produce a book a year. Now at 82, having spent several years helping her late husband through his struggles with the effects of childhood polio, she worries she might be losing her touch. Glancing inside the cover, she checks the copyright date. “Okay, 2009,” she says. “That’s pretty good. I was worried I wasn’t producing enough anymore!”

Walking by Lihua’s Park View door, marked by two spectacular purple orchids, you’d never suspect how much work was going on behind there.  But since moving to Asbury Methodist Village in 2005, she’s completed several works and is currently outlining a new novel.

“My basic themes are alienation and rootlessness,” she says. “No matter what I write this shadow always follows me, this idea of characters who aren’t lonely, yet still feel very alone. Perhaps maybe we all feel this way deep down.”

Lihua began living these themes, so to speak, after she convinced her parents to let her travel – alone – to America for college. Even though it was a common dream of Chinese parents for their children to receive an American education, she says, it wasn’t common for a young woman to actually do it. “I told them that if I go, I will open the door for my brothers and sisters, and I did,” she explains.

She came to UCLA in 1953 to study literature but – in an ironic twist – was told she was not proficient enough in English to master the challenging reading list. Grasping for some way to utilize her strength in writing, she chose journalism.

During her time at UCLA, she met her first husband. They married just after she graduated and three children soon followed.  Home, stressed, and with no way to practice her journalism career, she turned to fiction writing in 1960, publishing her first novel a year later. Her long literary career includes translations of some American classics into Chinese, 20 years spent teaching college literature classes, as well as countless novels, novellas, and short story collections.

A self-described “stubborn” woman, she sets schedules and sticks to them, and her current one has her writing in home office for three hours each afternoon. “I may only write one sentence, but I stay there and work at it,” Lihua says. Her newest idea is to create a fictionalized account of her second husband’s life, which she describes as very inspiring. Vincent O’Leary, who died this year following complications from polio, was the president of State University of New York, Albany, for 13 years, forging an interesting career from a difficult childhood.

“My husband was very strong,” Lihua says. He grew up poor in San Francisco, the son of a first-generation Irish immigrant mother and a father who left the family when Vincent was six. He contracted polio at age 3 and by 6 had undergone several painful operations to correct his gait. “For his entire life, my husband walked around with a 20-pound brace on his leg,” she notes.

When the novel is finished, she’s likely to have a ready audience. Although her work is written in Chinese, her granddaughter will help her translate this novel into English, and Lihua is well-respected in academic circles in this country.

Nativism Overseas, a survey of China’s most influential female writers of this century, included Lihua in its short collection. And in 2006, she received an honorary doctorate from Middlebury College on the same day her granddaughter, Tara, graduated with a major in Chinese. “During the past half century, you’ve woven an intricate tapestry where themes of rootlessness, identity crisis, and, finally, reconciliation tell the story of what it means to be Chinese in the world,” read the college’s letter explaining Lihua’s selection for the honor. “You are as prolific a writer as your work is profound.”