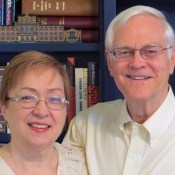 For Tiiu Kera and Norm Wolfe, moving to an Asbury Villa in January was the 19th in a long string of moves together. The two have been on the go throughout their military careers – Norm as an Air Force military attorney and procurement officer and Tiiu, a top-ranking intelligence officer and Major General. Assignments took them to bases on both coasts, Nebraska and overseas in Germany, Thailand, Turkey, Korea, and Lithuania. Their favorite posting (prior to arriving at Asbury, at any rate) was in Lithuania where Tiiu served from 1993-1995 as the first U.S. Defense Attaché to Lithuania.

Norm and Tiiu are an all-American couple. His ancestors – including British Major General James Wolfe, who defeated the French in the Battle of Quebec – came to America during colonial days. Norm graduated from Denison and Ohio State universities and fully intended to return to Mansfield, OH, after fulfilling his military obligation. The variety of legal work in the Air Force, however, proved compelling. Tiiu’s parents fled the second Soviet occupation of Estonia during World War II, and she was born in a refugee camp where they waited five years for emigration to the United States. They settled in Rochester, NY, and Tiiu graduated from Valparaiso and Indiana universities. She joined the Air Force as a way of repaying her adopted country for her family’s new start in life. She also was drawn by the military’s policy of pay equality for women and the chance to live and work around the world.

Norm and Tiiu were colleagues early in their careers, but met again and married a decade later. After Tiiu graduated from the National War College and was assigned to the Joint Staff, Norm retired to freelance and enjoy with Tiiu the adventures to come in the post-Soviet era. Together they attended Attaché training and moved to Vilnius while the Soviet military was still in Lithuania.

A month into her assignment at the embassy, all foreign diplomats were summoned without explanation to the Lithuanian parliament. Given that the Russians had been resisting pressure to withdraw their troops, Tiiu worried she might be among a third generation of her Estonian family to be killed or taken to Siberia by Russian forces. As it turned out, the Lithuanian government called the gathering to announce the departure of the last Russian unit from the territory of Lithuania at midnight. The diplomats were called to witness the departure and then join the jubilant celebration.

Tiiu was promoted to Brigadier General near the end of their time in Lithuania and then to Brigadier General while at Offutt Air Force Base in Nebraska. After retiring in 2002 from her final assignment in the DC area, she and Norm lived on Capitol Hill until moving to Asbury.

After visiting 16 retirement communities, they chose Asbury for its location in the greater D.C. area, its robust continuing care services and for their villa, which accommodates both Norm’s woodworking shop and Tiiu’s paper arts studio. Their siblings, nieces, and nephews are scattered across the country, they say, so their new Asbury relationships are all the more important.