Asbury Solomons > Working Past Retirement Age? Why Not?

David Winterle Working Past Retirement Age. Why Not? 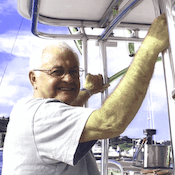 Whether it’s volunteering within the retirement community where they live or focusing their efforts outward, Asbury residents are busy doing exactly what they want to be doing – making good use of their time and talents.

For David Winterle, that means working for the Federal Emergency Management Agency (FEMA), a job he applied for in 1996 after careers in the military and local government. Though Winterle is a part-time employee, FEMA’s mission means that he may go months without working and then put in 12-hour days when a disaster strikes.

Asked if he could offer a story of why this work was meaningful to him, he began a story but had to stop after a moment to regain his composure.

“One person that has always stood out was a retired Navy individual, and the guy was having a hard time getting registered,” David says. “His home was totally flooded, and he was living in part of it with black mold and everything. I can recall – just as I’m doing even now – I recall having to pull over on the side of the road driving home to start crying. But in the moment, you’re dealing with people who are breaking down and crying, and you’ve got to be the supportive one.”

This drives David to continue serving despite the fact that his retirement doesn’t look much like the scenario must of us envision. During Hurricane Sandy, he spent weeks in a Holiday Inn on the New Jersey shore fighting a cough that had already sent him to urgent care multiple times.

For David, it’s not the money that drove his decision to embark on a third career of helping others because there are certainly easier ways to earn a paycheck. His assignments over the past few years read like a top-10 list of national news: hurricanes, wildfire and floods.

Typically, David works about six months out of the year and enjoys fishing at his Asbury Solomons home during his off time. But after a few months, he notes, his wife “will look at me after a while and say, ‘Well, it’s time for you to go again.’ This keeps my brain charged and makes me feel good. I get antsy without it.”

Asked if he thought he should slow down and set a firm date for retirement, he had an answer ready: “I’ve set my deadline. It’s when I can’t do it anymore.”