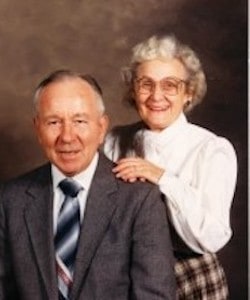 Artha Jean Snyder has been a resident of Asbury Methodist Village since she and her husband, Grant, moved from Darnestown, Maryland, in 2002.

They moved to Asbury Methodist Village then because Grant said, “It is time.” Grant was a kind, gently man with a winning smile who was always busy, loved people, and always has an interesting story to tell. He had a career in the U.S. Air Force, serving in WWII and Korea, and with IBM. He was an accomplished accountant, and he loved to make things, especially with wood. Since first being diagnosed in 1977 at the age of 57 years, Grant battled Parkinson’s disease, which was slowly taking control of his body. In 2002 he felt that he and Artha Jean needed to be settled at AMV before things got any worse.

Sometime during the 1990s, Grant and Artha Jean began to attend weekly meetings of a Parkinson’s Disease Support Group that meets in Montgomery Village. Each meeting consists of an exercise session followed by a discussion on coping with the disease. They found both the exercises and the sharing helpful and continued attending even after moving to AMV. Other AMV residents with Parkinson’s disease also attended.

Grant faithfully attended these classes from the very beginning. He thoroughly enjoyed them, and he felt that both the exercises and fellowship greatly helped him cope with this progressively worsening disease.

Grant and Artha Jean have been supporting this program through the Asbury Foundation since 2005 so that others might partake of its benefits free of charge.

In 2007 and 2008, Artha Jean entered into an agreement with the Asbury Foundation whereby she contributed more than $80,000 to create an endowment fun at Asbury Methodist Village in memory of Grant, who died on November 27, 2006. The Artha Jean and Grant Snyder Endowment Fund’s stated purpose is to fund an exercise instructor to provide twice-weekly classes for AMV residents afflicted with Parkinson’s disease; the classes are also open to the wider community.