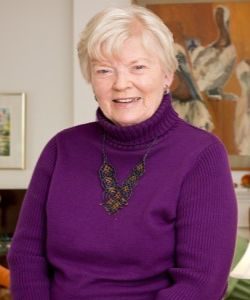 A resident of Springhill, who has friends at Asbury Methodist Village, Betty McLaren has been on the campus of more than one Asbury community.

From the Erie area, Betty has been a resident of Springhill since 2008. She and her husband previously lived in Erie as well as on a large farm in the Sherman, NY area. You could find Betty on the ski slopes or tennis court, but never far from a game of bridge with her special friends. Betty has five children, Barbara, Nancy, Robert, James and Thomas.

Since moving to Springhill, the community has greatly benefited from the many talents of Betty McLaren. She currently serves as president of Resident council, is a member of the Foundation Committee, and is a volunteer for The Hill Shop. Betty is also a Heritage Society member having made a planned gift to Springhill. Additionally, Betty coordinated a weekly Lenten preparation series which added to Springhill’s spiritual enrichment programs.

Recently Carol Eller, Director of Development, enjoyed a visit with Dr. and Mrs. Parker Dorman in the Wallace building at Asbury Methodist Village campus, and swapped stories about Betty. Seems she and her husband began a lifelong friendship with Dorman’s that began when Dr. Dorman and Dr. McLaren met during their residency in medical school.

It’s people like Betty McLaren that make Springhill a great place to enjoy every day!