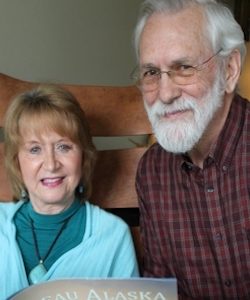 Eldon Baldwin and Barbara Sanders became part of the Asbury Solomons community in November 2016. They always knew they wanted to join a continuing care retirement community. Eldon’s mother was part of a community in Oregon, where they spent a great deal of time. They wanted the same experience, so they began their search throughout Maryland.

Eldon and Barbara had spent time checking out the Solomons area, walking the boardwalk and enjoying the sunsets. When they came to visit Asbury Solomons in the fall of 2016, they never expected to fall in love with an available river-view cottage. They decided to seize the opportunity, especially after learning how the Real Estate Partnership Program through Asbury Foundation could help. The program deferred their entrance fee until their house sold, in exchange for a charitable gift to the Foundation at the time of the sale. They moved from Upper Marlboro, Maryland, into their beautifully renovated cottage at Asbury Solomons in the spring of 2017.

Shortly after moving in, Eldon and Barbara were asked if they would be willing to have their gift help start the Asbury Solomons Healthcare Scholarship Endowment Fund, which would support associates who were pursuing further nursing education. They didn’t hesitate to say, “Yes!”

“It was natural,” said Eldon. “We’ve spent our lives helping students.” Eldon spent 43 years at a mathematics professor at Prince George’s Community College. Barbara also spent her career there, as a counselor and professor. They’ve continued that legacy at Asbury Solomons through their support of the Healthcare Scholarship Endowment Fund and Barbara’s involvement with the Healthcare Scholarship Committee.

“It was an uplifting experience,” commented Barbara, as she described working on the committee. “I was impressed by the compassionate, dedicated professionals here.”

Barbara recalled times throughout her career in education when she saw talented students who were inhibited by financial difficulties. The scholarship strives to help lift that burden so that associates can focus on their studies.

In 2017, the Asbury Solomons Healthcare Scholarship Committee awarded $20,500 to six recipients. Through the generosity of Eldon and Barbara, associates for many years to come will be able to further their education and continue to provide exceptional care to residents of Asbury Solomons.