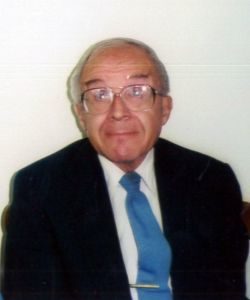 Harold and Myra Prowell had always wanted their second son to live a normal life, although it was apparent from his developmental delays that he would never live on his own. There was no such diagnosis as autism in 1937 when Gilbert was born, nor ways to prevent brain injury during a long birth.

Whatever the cause of his challenges, Gilbert was intelligent and observant, and learned how to take care of himself and interact with others. He earned his high school diploma and went to work in downtown Harrisburg, Pa., where his father was an attorney. He searched land titles for the courthouse, which “he could do better and faster than anyone they’d ever seen,” recalls his younger sister, Myra. He then held jobs delivering mail, and loved the freedom to spend his days walking and taking the bus throughout the Harrisburg area. Everyone in town knew the serious young man.

As he got older, it became harder for his parents to manage him when he got upset and wanted to wander into the city. Gilbert’s brother and sister were both married and out of the house. When their mother died and Gilbert and Harold were left alone, the worries began to escalate. While Myra and her brother, Todd, were paying for help to come in, they were concerned about their father’s forgetfulness and Gilbert’s constant wandering.

“Then dad’s house got robbed, and we knew we had to get them out of there,” says Myra. Bethany Village was nearby and had a good reputation, so in 2001, Gilbert and his father moved into a two-bedroom apartment near Bethany’s original community center.

Gilbert thrived. He liked dressing up for dinner at the semiformal Traditions dining room, reading and using the computer in the library just down the hall, and going on the community’s bus trips, especially out to dinner theaters and restaurants with his father. He simply loved to explore, and associates worked to respect his freedom safely. He would walk for miles through campus and into Mechanicsburg no matter what the season. Residents, staff and those in town quickly came to like the quiet, dapper man, who was always well dressed and groomed and greeted people with a formal, “Good day.”

Brian Grundusky, now associate executive director and administrator of health services at Bethany, was a department supervisor and got to know the Prowells when they first moved in. “I had a lot of respect for Gilbert’s dad and how much he wanted Gilbert to have a full life,” Brian says. “I was so impressed by how strong their relationship was and how devoted they were to each other.”

Brian recalls that Gilbert was private rather than shy. “If he felt familiar with you, he would start a conversation. He would come up to me a lot and ask how I was doing. He really blossomed with the interaction with staff and residents. We were his friends.”

Gilbert’s father, having lost his wife of 67 years and growing increasingly frail, died shortly after the move, at the age of 96. The staff was worried how Gilbert would handle it. “We wanted to make sure he continued the lifestyle his father wanted him to have, and so I checked in with him frequently,” recalls Brian.

Associates provided Gilbert the comfort of a daily routine. They remembered little things he really liked and gave him extra portions of his favorite foods. “We became his family,” says John Bowen, director of social services, who worked with Gilbert after Harold’s death.

Gilbert moved to the community’s assisted living center, where his sister Myra says he loved being able to have his own apartment. He continued his long walks, hours in the library and bus trips.

“His pleasant formality always made people smile. And he noticed every little detail,” remembers John. “For instance, shortly after the Bethany West expansion was completed, Gilbert asked, ‘When are we going to get flag poles in front of the new building like we have in front of the original building?’ I don’t know if this happened because of Gilbert, but not too long after, we had new flag poles!”

His brother passed away, but Myra continued to come out from Wisconsin a few times each year to visit Gilbert. As his health declined and he was moved to Bethany’s skilled nursing center, she was also in frequent phone contact with the staff. A practical, forthright woman, she made sure they and Gilbert had everything they needed. Brian says, “She was always very positive, caring and appreciative, while still remaining a strong advocate for Gilbert.” Adds John, “I give a lot of families who live at a distance credit for the trust they place in us. And I absolutely felt Myra trusted us.”

Gilbert died in 2012. “That was a hard day for a lot of our associates, and for me,” notes Brian. “Several of us had a strong bond with him.”

Just this year, the staff found their caring acts had not been forgotten. Unbeknownst to all at Bethany, on one of her visits, Myra had discussed with Gilbert where the funds from the trust their father had set up for him should go after his death. They decided that everything should go to Bethany Village.

“Everything” was $2.1 million, the largest gift in Bethany’s history.

“I brought up the idea,” says Myra. “But I really do think Gilbert understood and wanted this. He liked everything at Bethany. And believe me, if he didn’t want to do something, he would tell you!”

And what inspired Myra? “My brother always received good care, and they kept him safe. He was happy. As he needed more help and became more difficult, I used to watch and marvel at how patient they were.”

Myra felt the gift would be appreciated and used well at Bethany Village. “My generation is going to need good places like this because we’re living longer and may not be able to take care of ourselves until the end. I think the money went to the best place it could have gone.”

Melissa Hadley, Bethany Village executive director and Asbury regional director of operations, says this significant gift will greatly enhance the living space and wellness opportunities that Bethany offers to current and future residents. “We are now able to move forward in a strategic master plan and make lifestyle enhancements that would have had to wait for years.”

With Myra’s approval, a portion of the funds will be used to complete Phase I of Bethany East renovations as well as purchase 30 acres of adjoining land.

Melissa explains that they were notified of the Prowell family’s gift this year right after the United Methodist Home for Children next door had offered to sell Bethany the acreage. “Seems this was meant to be!” she says. “With this gift, we can expand without incurring significant debt, which allows Bethany Village to offer exceptional resident experiences at affordable rates.”

She adds, “We are all deeply grateful for the Prowells’ generosity that will allow us to better serve seniors and keep our promises to those we serve. ”

Myra is glad the trust will be used for the land purchase and the Bethany East revitalization. She hopes to see the renovations in person next year, including the new library, which will be named in Gilbert’s memory.

“In lieu of the time and care that Gilbert and my father received, this gift is well deserved,” she states simply.

All at Bethany Village are moved and humbled by this incredible expression of appreciation. It is a beautiful example of what a tremendous impact one family’s thoughtfulness and all of our care and kindness may have.