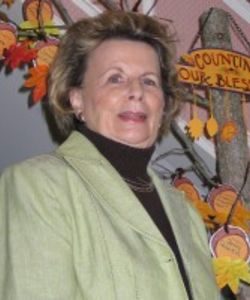 “I think it would be nice to have a campaign where residents can express their thanks to each other and to the associates by giving to the Benevolent Care Fund.”  What a tremendous idea from a truly remarkable person.

Asbury Solomons resident Margaret Hayes brought her idea of a Thankful Giving Campaign to the Foundation in the Fall of 2008.  The idea resulted in a tree that was adorned with leaves bearing the names of honorees.  Next to the tree laid a book where messages of thanks were proudly displayed.  The tree, displayed in the lobby of the community center, filled quickly, and a larger-than-normal sense of gratitude spread across campus.  The campaign generated thousands of dollars for the Asbury Solomons Foundation.  The following year, the campaign continued, this time with a garden bearing paper flowers with the names of honorees.  Once again, the garden quickly filled and flowers had to be placed on the table around the garden.  Consequently, this highly successful event has become a campaign the community plans to sponsor around Thanksgiving each year.

“There are not many people, nor departments in the Asbury Solomons community, which have not been positively influenced by Margaret Hayes.”

She has provided service and support in so many ways.  Her Asbury story is full of interesting facts, and is rich in compassion and dedication for all residents and associates.

Soon realizing that she could help in all areas of the community, Margaret joined the Resident Council.  She served two terms, first as secretary, then as president.  She was elected to the Asbury Solomons Board of Directors in 2003 and has recently completed a six-year term of service.  Margaret serves on the staff of River Views, is one of the original “Party People,” and is a member of multiple committees including the Computer Club, Marketing Committee, and Entertainment and Travel.

Prior to moving to Asbury, Margaret experienced a full life as a wife and mother, a professional, and a pillar in the local community.  After college, she worked at Pepco, first as a writer for the company’s monthly magazine and later as a secretary to the Legal Counsel.  When her husband retired on disability, she started a second career in the management office of a local mall, and became a Certified Marketing Director in 1990.  She was instrumental in forming a Partners in Education relationship with a local middle school.  She worked with a local AARP chapter to organize a “mallwalking program” which began with 40 walkers and increased to 1,000 (and is still going strong today).  Many students in Prince Georges County are still enjoying the $10,000 Scholarship Awards program which Margaret started years ago through her career in management.

Through all of her hard work and service, the topic that brings a twinkle to her eye every time is “grandchildren.”  Margaret and Ed have two children, Steve and Susan, and are blessed with three grandchildren, Mike, Matt, and Molly (who, we must add, were honored on our 2008 Thankful Giving Tree.)  “I think I inherited the “volunteer gene” from my family,” Margaret shares.  “My mother and grandmother were actively involved in fundraising for the Ruppert Home for the Aged as well as the German Orphan Home in southeast Washington.  Our whole family played a role in supporting the residents of these homes.  In 1939, my father, who was born in Scotland, organized a major golf tournament in Washington, D.C. to benefit the British War Relief Fund.  With our children, we participated in all aspects of the Marlboro Boys and Girls Club where I was the first female football coach, in the Happiness Club which worked closely with the children in the Orphan Home, and in school and community events.  The volunteer gene has indeed passed on to our children and also to our grandchildren.”

“Having someone on my side with the professional experience, connection to the community, creative ideas, and compassion for the Asbury Solomons Benevolent Care Fund is an absolute blessing,” shares Melissa Carnes, Director of Development for Asbury Solomons.  “I cherish every moment that I am able to spend with Mrs. Hayes as I always leave feeling that I am a better person.  I learn from her, she helps me grow professionally, and she shares my dedication to serving our residents in need in at Asbury Solomons.  She is a role model, and she is a great friend.”

“Having been so actively involved in the Health Care Center, I soon realized the need to build a strong foundation for the Benevolent Care Fund,” says Margaret.  “No matter how well we have planned for the future, life sometimes has other plans for us and our financial status can change quickly.  I am determined to do whatever I can to keep residents worry-free about being cared for.”