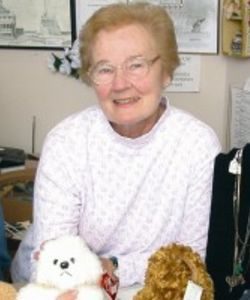 Austin and Martha Canfield, who had relocated from Montgomery County to Calvert County to enjoy their sailboat, moved to Asbury Solomons more than 12 years ago. In fact, they were number 50 to put their names on the list!

Martha’s parents were residents at Asbury Methodist Village in Gaithersburg, Maryland, and Martha and her husband were very impressed with the staff and general care for her parents. “If Asbury ever comes to Southern Maryland, sign me up!” she remembers saying.

When an article in the local newspaper mentioned the creation of Asbury Solomons, the Canfields jumped at the chance to become residents. “If you have to live somewhere, why not do it where they will take care of you for the rest of your life?” Martha explains, remembering her parents.

Martha quickly became involved in a major project in their new community. The Canfields had owned a little store in Prince Frederick, and Martha had mentioned to then-Executive Director Sue DaCamara that if they needed someone to run a gift shop, she would volunteer her time.

A few months later, Sue inquired if she were still interested. That was 1998, and Martha has been managing The Asbury Sails gift shop ever since. It was established thanks to a charitable gift from a local guild and the help of Flo Seymour, who served on the Asbury Solomons Board.

Martha isn’t alone at the shop. She is assisted by wonderful volunteers always willing to help. Residents make note cards, jewelry, books, knitted or stitched things, sculptures and painting to be sold in the shop. All proceeds are donated to the Asbury Solomons Benevolent Care Fund.

The Asbury Solomons benevolent care program is important to Martha because when her father was at Asbury Methodist Village, she knew had he lived a few years more, he could have needed financial assistance. She was told he wouldn’t ever need to move. Martha was impressed.

“Although you hope it will never happen to you, it’s wonderful to know you have that kind of security; it’s part of why we chose Asbury.”

Her mother and father’s memory also lives on in another way. Upon hearing about the campaign for a new fitness center at Asbury Solomons, Martha and her brother pooled their funds and made a generous donation in memory of their parents.

According to Martha, there could not have been a better place to be than Asbury Solomons. When her husband passed away in 2005, her many friends in the community helped her through the harder times and kept her involved in the numerous activities on campus. She was overwhelmed by the many donations to the Benevolent Care Fund made in memory of Austin.

“We have each other here. There is companionship you won’t have when you live alone.”

Martha speaks fondly of her granddaughter’s frequent visits and of the neighbors who have seen her grow into the teenager she is now. “They say it takes a village to raise a child; well, the same goes for a senior,” she says. Whether it is driving each other to a doctor’s appointment, being there for each other when they are experiencing loss, or donating to the Benevolent Care Fund, the residents at Asbury Solomons care for their neighbors.