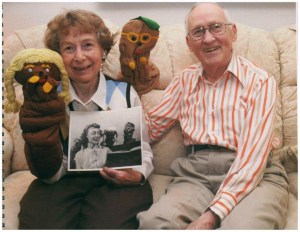 Countless children have fallen in love with books because of Pinkie and Rod Jones, who came up with the idea for Buddy the Bookworm reading mascot to introduce books to children through a television series. That may not sound innovative today, but it certainly was in 1958 in Tulsa, Oklahoma.

The couple had speech and theater careers on the faculty of Tulsa University. In 1958, Pinkie was approached by the Tulsa City/County Library about creating and producing a public service children’s program to air on Saturday morning television. Pinkie relished the opportunity and produced and hosted the 30-minute program, which featured local elementary school students. She also designed and sewed the first Buddy Bookworm and his sidekick, Bee-Bee. Rod became the voice and puppeteer for Buddy.

The show was very popular and was broadcast regularly until 1960. Rod says, “It was the real deal, even listed in TV Guide.” He also admitted they finally decided they should buy a television for their home so they would be able to watch their own program.

As Rod reflects on his creative and theatrical journey with Pinkie, he recalls her many passions throughout her life. Her love of flowers and gardens in particular guided them in 2012 to choose an Inverness Village apartment where Pinkie could lie on the sofa facing the large sliding doors that led out to “Golden Pond” and beautiful landscaping. She brought several of her favorite plants with her, including a lemon tree. As Pinkie’s health became more compromised, Rod continued to take care of her plants as best he could He poignantly shares the power of Pinkie’s presence even when her health began failing: “The lemon tree began losing leaves, and the day Pinkie took her last breath, the lemon tree dropped the last leaf.”

Rod and Pinkie always enjoyed supporting their community through their creative talents and philanthropy, and Rod at 96 years old continues to stay active around Inverness. He gives consistently to the Benevolent Care Fund and recently donated a large gift in honor of Pinkie.

Rod chose to give his entire entrance fee refund to Benevolent Care and to memorialize his wife with a plaque on a bench outside the Joneses’ glass door, overlooking the beautiful landscape and pond. Rod is looking forward to establishing this memorial and honoring Pinkie amid the view she enjoyed so much during her last days.