Spirit of Philanthropy Lives on at Springhill 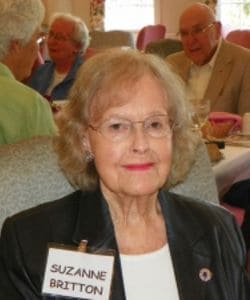 As president of the Britton Family Foundation, Suzanne Britton and her husband, John, were longtime supporters of numerous causes and institutions ranging from Erie, Pennsylvania, to Sanibel, Florida, where the family wintered.

Suzanne’s benevolence extended to Asbury after she moved to a Springhill Garden Home in 2005. She quickly became a devoted benefactor of the community and, in particular, the Lifestyle Enhancement Campaign.

Over the years, her total gifts to Springhill exceeded $150,000 and not only supported benevolent care for Springhill residents but had an incredibly important impact on the physical community as well. She contributed to Phase 1 of the Lifestyle Enhancement Campaign, which expanded the fitness center and added the All-Faith Chapel and a popular Social Lounge.

Suzanne passed away in December 2016, having just celebrated her 89th birthday with friends and family. Prior to that, she had given an additional $10,000 to Phase II of the Lifestyle Enhancement Campaign – a gift that will ensure her spirit is felt around Springhill for many years to come.

“Suzanne and her husband realized they were fortunate and that it was their privilege to be able to help others,” said Jim Schneider, executive director of Springhill. “It was always a delight to see her. She was a gracious and stately lady.”