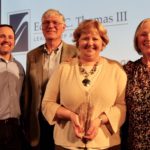 Asbury is one of the leading non-for-profit retirement living organizations in the nation for many reasons, but associates are a critical component of our ongoing success. In the past several years, we have launched several associate recognition programs tied to the core competencies we seek in our workforce: accountability, caring, civility and respect, customer service, fairness, integrity, and responsibility.

The Edwin C. Thomas III Leadership Award was unveiled in 2015 at the retirement of President and CEO Ed Thomas to commemorate his contributions to the development of Asbury Communities, Inc. The award recognizes one Asbury leader who has demonstrated extraordinary efforts either throughout the calendar year or during the span of their career. Presented by President & CEO Doug Leidig, the ceremony is held during the Leadership Development Institute’s formal dinner. Here, Asbury’s 2019 winner, Springhill Executive Director Jane Gibson is pictured with from left, Doug Leidig, Ed Thomas, and Asbury Chief Operating Officer Sue DaCamara.

Asbury’s Going the Extra Mile (GEM) Award puts recognition directly in the hands of associates, allowing them to recognize each other for work well done. In this informal program, associates can give GEMs to their colleagues – as can supervisors – without a nomination process. The GEM is documented and added to the associate’s employee file by Human Resources. At the ASCC, GEMS are presented during the weekly Huddle, with each community designating their own process.

The GEM program was launched in 2016 by the Associate Recognition Task Force following a months’ long process which culminated in a retreat where task force members from across the system came together for two days. Since the program’s launch, more than 2,000 GEMs have been given by Asbury’s 2,600 associates.

At the 2014 Leadership Development Institute (LDI), Asbury held its first-ever Azzy Awards, recognizing associates at the manager level or above as an outstanding example of an Asbury core competency. The Azzies require that a supervisor complete a formal nomination application, which is then reviewed by a subgroup of Asbury’s Associate Recognition Task Force. In addition to being publicly recognized during LDI, associates receive an Azzy Award and their name is added to the Associate Recognition display at the Asbury Support & Collaboration Center. In 2018, the Azzies were expanded to include associates at all levels of the organization. To date, more than 200 have been awarded.