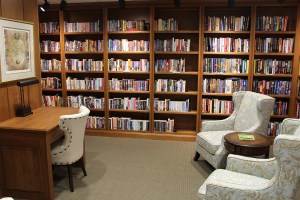 The Eric Vaughan Smith Library is a small, yet beloved space on the Asbury Solomons campus. In the main hallway of the community center, it provides a place of learning, relaxation and adventure!

In 2000, Donald K. Smith, an Asbury Solomons board member (now deceased), and his wife, Sarabeth, now a resident, made a gift to have the library named in honor of their son. Eric was a talented young man with a passion for the written word. Unfortunately, he passed away in 1993 after being diagnosed with leukemia in his senior year at University of Virginia Law School.

Although she spends much of the year in Vero Beach, Florida, Sarabeth is a Solomons Island native and became an Asbury Solomons resident in 2015. On her walks from the south building to the community center, she passes the library dedicated to her son’s memory.

As the hallway, lobby and other spaces were modernized, Sarabeth began to feel the library needed an update. She reached out to Director of Development Heather Mattingly and made a generous gift to fund the refurbishment. New cherry cabinetry, additional shelving and comfortable furniture for avid readers now adorn the Eric Vaughan Smith Library. A rededication is planned for the fall to celebrate the life of an admired young man and a cherished community space.