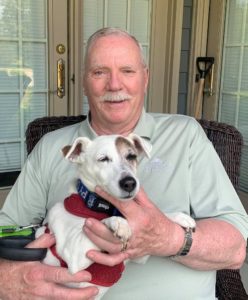 At six-feet, four-inches and 265 pounds, John Flynn’s stature is only surpassed by his bigger-than-life personality. John moved to Springhill from his home in East Moriches, NY, in November of 2020, just six months after losing his beloved wife of 54 years.

“My kids wanted me to get out of Dodge,” John says about the timing of his move. “I was in a bad way.”

Coming off six years as the primary caregiver for his wife and grieving her loss, along with the demands of a 54-year-old home, oldest daughter Terry and her physician husband Scott – who live in Erie – began a search and identified Springhill as a great option for her dad.

Not long after, John visited Springhill and knew it was where he wanted to live. From the associates to the residents, John says he felt immediately welcome.

And because Springhill is a continuing care retirement community, he had peace of mind that should he need additional services, they were right there on campus. “I have a lot of injuries that sometimes require surgery,” he says. Soon he and his beloved Jack Russell Terrier Foxy moved into their 2-bedroom apartment.

“I’m surrounded by wonderful people,” John, 77, says of his life at Springhill.

John is a former Army Green Beret and retired Suffolk County, NY, police detective. Over the years, his career has included conducting top-secret missions in Berlin during the Cold War, disabling explosives both in the Army and as a police officer, and was part of a police sting investigation looking into hazardous chemical dumping by the Russian mob in the Brighton Beach neighborhood of Brooklyn. “Police work is 90 percent acting,” John jokes.

He can talk for days about his police work and how much he enjoyed it all, from the mundane to the miraculous. But when asked to recount what are some of the most memorable, he shared two: Rescuing and saving the lives of painters overcome by noxious fumes and trapped in a 160-foot water tower, and capturing “Henrietta,” an illegally owned 120-pound lion who broke out of her cage in her owner’s warehouse. (Henrietta’s brother Solomon, still in his cage, was also taken in that day and both siblings were relocated to an animal wildlife shelter in Maryland.)

It’s a testament to his colorful career that falling off of a 25-foot building does not top his “most memorable” list.

Life is a little calmer for John these days, although he’s not one to let the dust collect. His spare bedroom, among other things, serves as his fly-tying workshop. He’s a lifelong fly fisherman who’s traveled near and far, he jokes, “trying to outsmart a fish.” Montana, Wyoming, Idaho, Alaska, and the Adirondacks are among the places where he’s casted his fly.  Woodworking is another hobby, and he spends a lot of time in the campus woodshop making shorebird decoys.

John’s also a voracious reader and no surprise, counts the epic fly-fishing story A River Runs Through It as one of his favorite books and movies.  He’s an accomplished cook and enjoys improving his skills in his new kitchen. Along with fishing flies, that spare second bedroom also contains a binder full of recipes clipped from the Dining Out section of The New York Times.

He and Foxy like to walk the Springhill campus, talking with neighbors and meeting new friends. “I’ve met a number of ladies,” says John. “In fact, most of the residents are ladies.”

But according to John, Foxy is usually the object of their affection. “They fall all over themselves to pet my dog.”