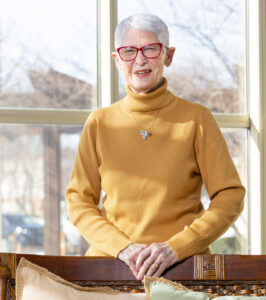 If you’ve ever wondered if one person can make change in the world, meet Bethany Village resident Judith Clovsky.

During her career as a mental health nurse, she helped untold numbers of people find a path to productive and fulfilling lives.

Along the way, Judith helped develop a child abuse task force in New York state, ran the Elmira, NY-branch of the YWCA, and helped deliver babies during her early years as an obstetrics nurse. She’s also taught at the community college level and earned a masters in community mental health nursing.

“I’m not content to sit still,” laughs Judith, who since 2015, has been happily ensconced in her East Cottage home at Bethany Village in Mechanicsburg, Pa., with husband David.

Each morning her day begins with a five-mile walk around the campus.  She also squeezes in swim time at the pool and has rekindled her love of knitting by joining the knitting and crocheting club.

Add to that her role as president of the Resident Council; member of the community’s nursing grants committee, which provides scholarships to Bethany Village associates; and a stint hosting monthly Q&As with the executive director on the community’s TV station during the height of COVID.

“I totally love this place,” says Judith, who admits that she and David didn’t know that continuing care retirement communities like Bethany Village even existed when they began their search for senior living options back in their native state of Pennsylvania. “We walked in and thought ‘this place is amazing,’” says Judith. Less than a year later, the couple relocated from Elmira and moved into their new home.

As longtime members of Rotary, Judith began searching for a local chapter that was active in the area not long after she arrived. She soon started volunteering in the food bank and helping with fundraising. She also chairs the International Committee, which focuses on outreach to clubs in other countries.

“Volunteering is personally fulfilling for me,” says Judith. “It gives me the chance to support people who might not be as fortunate as I have been. It also brings great people interaction.”

Judith’s commitment to Rotary isn’t confined to her immediate community. In the fall of 2017, she spent 10 days in Uganda performing medical screenings for residents living in the country’s rural villages – an experience she’ll never forget.

Move to CCRC frees time for serving others

“These are extremely kind and gracious people who were so appreciative of everything,” says Judith. “And they have so little.”

Just a year later, Judith went back to Africa on another medical mission, this time to Malawi, where she and other volunteers mentored and educated 70 medical students and helped organize donated medications, equipment, and other supplies.

The arrival of COVID in 2020, sidelined additional missions for now.  But Judith hopes that sometime soon, they’ll be another opportunity. This time in Puerto Rico, a country where Judith is focusing her efforts in her role on the international committee.

“Living here gives me the freedom to do this,” says Judith. “The support of the people who live here and the services provided by this community make it possible for me to support others.”