East Cottage Home Is Proactive Plan for the Future 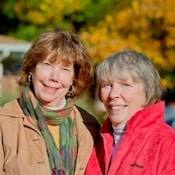 When Ann Chance and her husband, Joe Kearney, decided to move to Bethany Village they were leaving behind a light-filled home they had built for their retirement situated on wooded lot in a West Virginia golf community.

“It was a beautiful community full of wonderful people, but it took an hour to get anywhere,” Ann says. “We wanted to be near a town, restaurants and stores. We knew our needs were going to be changing, and we wanted an environment that would meet that.”

Though the universal reaction among their friends was shock, “a few of our closest friends said they admired the fact that we were putting a plan in place for aging,” Ann says. “I think it’s important to be in control of your future. It’s more empowering that way.”

They came to Bethany Village in the fall of 2013, joining Ann’s sister Missy, who lives in a nearby East Cottage. (See below.)

After putting their name on the Wait List, they assumed it would be about five years before they were ready to move. But during a visit with Missy, they saw an available Cottage. When they discovered they could add a sunroom and deck and make some other changes, they were sold.

“We sat down and considered the spaces in our house that we actually used,” Ann says. “We considered our lifestyle changes. Our house was a party house, built for entertaining. But we realized we didn’t want to entertain as much. We knew we didn’t need all that space.”

Since the move, Ann has met neighbors while walking her dog and just finished a training program to begin volunteering at Bethany. She also began attending bridge classes and joined two bridge clubs in Harrisburg and is taking watercolor classes through the Mechanicsburg Art Center.

They enjoy not having to worry about how their roof, pipes or driveway are faring when they spend time during the winter on Alabama’s Gulf Coast.

“Joe and I are very open to changes in our lives,” Ann says. “By moving now, we were able to create the home for our future. I think that the longer you wait, the harder it is to make a move and to adjust to one.”

Ann Chance and Missy George are just one example of many families who have multiple members or generations living at Bethany Village. Thirteen residents have joined one or both parents at the community in the 50 years since it was established. Missy and Ann join close to 10 groups of siblings or sibling in-laws living here.

Read about the experience of Tom and Penny Cognato, who joined Penny’s mother at Bethany Village in 2013.