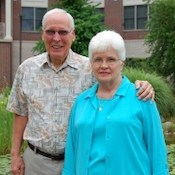 As a self-described “Type A personality,” Tom Fabian recalls his friend’s comments when he shared that he and wife Mary Lou were moving to Bethany Village. “They all said, ‘Tom, what are you going to do to keep yourself busy’ “?

They needn’t have worried. Instead of filling his hours with chores and home maintenance tasks, Tom has embraced the social, wellness and leadership opportunities that Bethany Village offers.

“We’re more involved than we ever would have been had we stayed at home,” Tom says. “I’m amazed at the number of people who are very, very active. They seem to cope with whatever comes to them. There’s a real ‘we-can-do-it’ attitude.“

He chalks up part of that attitude to the major bump in social interaction moving to a senior-living community brings. “Soon after we moved here I decided to count the number of conversations we had with different people in one day and we had 29,” he continues. “There’s so much variety in terms of people’s backgrounds and interests, too. That has definitely been the most positive thing about our move.”

He and Mary Lou have become a strong presence around campus – he as President of the Residents’ Council, and member of the Wellness, Dining and Facilities Committees, and she as a volunteer at the Gift Shop and Gallery Goodie’s cafe on Bethany’s East Campus. Both also volunteer as Resident Ambassadors for new and prospective residents. It’s not all work, though. They take advantage of community-organized trips to places like New York State wineries and local theaters and restaurants and are regulars on Bethany Village’s water volleyball team. Game lovers, he and Mary Lou take part in regular card games, Bunco, and a Mah Jong club that Mary Lou helped establish.

You would never know that when Tom first floated the idea of moving to Bethany Village five years ago, Mary Lou resisted the idea. “I guess I didn’t want to admit that I was getting to that stage of life,” she admits. “I still liked my house and always used the pool in the backyard. I wasn’t ready to let it go.”

But Tom wanted the peace of mind of knowing that if something happened to either one of them, they’d already be acclimated in surroundings that made the adjustment easier. “I’m an organizer,” he explains.

The ability to embrace change is a personality trait Tom feels many of Bethany Village’s residents have in common. As he walks the campus, he is buoyed by the positive attitude he sees everywhere.

Says Tom, “Mary Lou has said to me time and time again that this was the best decision we ever made, and I heartily agree with her.”