Home > Springhill > Who Lives Here > A Lifetime in Motion 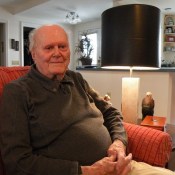 For Christmas, Bob Frenzel headed cross country on a family ski vacation in Vail, Colo. Avid skiers, Bob and his wife, Kathleen, spent a great deal of time at a vacation home in Vermont; Bob has also skied in the Austrian, Swiss and Italian Alps. The holiday vacation was Bob’s treat, and a way to get his three surviving children and his eight grandchildren together for some family time.

Unlike years past, though, where Bob would have been leading the charge down the slopes, “These days, they’ll be skiing and I’ll be recording it all on video,” he jokes. “But it’s a real gift for me to have us all together.”

A man on the move
Anyone who looks at Bob’s long career with General Electric might understand why Bob is content to go a bit slower these days. During his 35 years with the company, he averaged about two years in one place before a new assignment would take the family onto their next destination.

“The old joke used to be that IBM stood for I’ve Been Moved, but the same could have applied to GE,” he says. “Of course, I enjoyed it all. The fact that I was always learning something new made work very exciting.”

After graduating from the Massachusetts Institute of Technology, Bob entered GE’s electrical engineering training program where he decided – a bit belatedly – that he didn’t want to be an engineer after all.

He moved into the company’s television manufacturing division where he worked as a foreman before taking a year to earn an MBA from Syracuse University. From there, Bob was put to work marketing GE’s fledgling semi-conductor business. Soon, GE was ready for Bob to try his hand elsewhere, and he moved into engineering management.

“So you see, I skipped all the hard work,” he jokes.

The family lived briefly in Chicago where Bob worked as regional manager overseeing a section of the country that spanned from Denver to Cleveland, and then pulled up its stakes and headed back to Syracuse – a place they moved back to on four different occasions.

He worked as a general manager in Lynchburg, Va., and then moved to Gainesville, Fla., to work on strategic planning for GE’s existing business lines. The family stayed there for five years, which was their longest stretch in one place during his career with the company.

“My oldest daughter graduated from high school without ever having been in the same school for more than two years,” Bob says. “She decided to attend the University of Florida which was practically across the street from where we lived, exclaiming, ‘No way I’m moving again!’ ”

After taking an early retirement from GE, Bob and his family moved to Erie where he took a job with Elgin Electronics. In time, he rose to become president of the company.

A love of gardening and travel
Perhaps all that motion was hard to rein in because after retirement, Bob and his wife spent countless hours gardening their home’s seven acres – Kathleen attending to the annuals while Bob planted shrubs, perennials and collected and grew 400 different species of rhododendrons and azaleas on the property overlooking Lake Erie.

Through the course of his career and after retirement, Bob also managed to travel to 68 countries. “I had no idea I’d been to that many until recently when I decided to sit down and make a list,” he says. Ireland is one of his favorite destinations.

After Kathleen became ill, the couple decided to give up their house and grounds and moved to a Garden Home in Springhill. Kathleen passed away a few months after their 2010 move.

“Although I still miss our lake view, Springhill does an excellent job of supporting the people who live here,” Bob says. “My wife was so well taken care of when we came.  I am very grateful for that.”