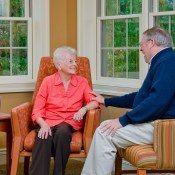 People who have seen Maude Cameron’s art work would call her gifted; she calls herself blessed.

Her professional life includes painting more than 300 wax figures for Ripley International, which owned Ripley’s Museums and Ripley’s Believe It Or Not; designing a wax museum in Alton, England; and, starring in her own television show called “Maude’s Craft Show.”

“I’ve been very lucky,” Maude says. “I’ve fallen into every job I’ve had.”

A life in art
“I’ve just always been able to draw and never realized I had any special talent until I was 14 and my art teacher looked at me and said, ‘You can draw a tree!’,” Maude recalls.  “I got up and walked around the room and looked at everybody’s paper and realized, ‘We’re not all the same.’ I just took it for granted.”

Her first paying art job came at age 16; a local advertising firm saw her cartoons in the school newspaper and paid her $100 for a series of drawings. “I was thrilled,” she laughs.

A native of Royal Oak, Michigan, a Detroit suburb, Maude married when she was just 19. She and her husband went to school on the GI Bill after he returned home from the Navy. She majored in art, while her husband entered the insurance business.

Working in wax
When her husband was transferred to Niagara, New York, Maude saw an ad in the newspaper for Ripley International, which was looking for someone to work in their Niagara-based sculpting studio. She went to work for them and soon became their head artist for painting the wax figure heads of presidents, movie stars and oddities. “I couldn’t believe I was so lucky,” she says.

In 1986, when the children were out of college, Maude got an offer to design a wax museum in a small town near Manchester, England. She thought it would simply require the installation of the wax figures, but when she and her husband arrived, they found an empty warehouse.

They ended up staying for two months, living above an 18th-century pub and becoming minor celebrities. “Everyone wanted to see the ‘American couple,’ ” she says.

Turning a new chapter
Maude came to Springhill in June of last year after a bout of health troubles made her realize that continuing to live alone in her Vermont home wasn’t the best long-term solution for aging. Her daughter-in-law’s mother had lived at Springhill, and they suggested Maude take a look.

She loved the idea of being closer to her children and grandchildren, and, when she returned home from the hospital, she put her home on the market. It sold in two weeks.

“I loved Vermont and had wonderful friends, but I felt like this was a new chapter in my life,” Maude says. “All my life I have had a strong faith, and I believe your life is planned. Who would know that my son would meet Sue and that she would know about Springhill?”

“I’ve learned very quickly that you can do just fine with a lot less. I go out to dinner with friends, I have regular brunch and card groups, I love attending the Great Courses lectures. You never lack for anything here. One day a few months after I moved in, I woke up and thought, ‘I’m really happy!’ ”