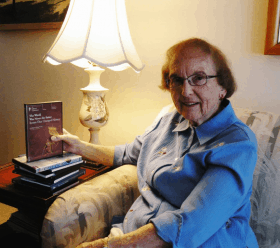 Jean Dunn has never been a professor, but she sure loves what they have to offer. An accountant by trade, Jean calls herself a “green eye-shade type of person” who tends to be interested in many different things, but not an expert in any of them.

So when she came upon The Teaching Company and its Great Courses DVDs, she thought they would be ideal for Springhill residents.

Several years ago, Jean had initiated classes through a different educational offering called Great Decisions,” says Sandy Buckley, Wellness Director at Springhill. However, that required that residents take turns facilitating and moderating the courses, “which was a little more pressure than a lot of people wanted,” she notes. With Great Courses, ‘students’ virtually sit in on lectures by some of the country’s most acclaimed professors. They receive a study guide typed up by Jean, and after the lecture, the floor is open to discussion.

The new program has been a success from the start, both Jean and Sandy say.

The most popular – Great Moments in History – devoted classes to such key turning points as Hitler’s rise to Chancellor of Germany, the Wright Brothers’ flight at Kitty Hawk, a look at the philosophies of Adam Smith versus Karl Marx, the Russian Revolution and General Pickett’s doomed charge at Gettysburg.

“For the lecture on Hitler’s rise to power, there were people standing out in the hallway,” Sandy recalls.

The program runs twice a week, but breaks for the summer. And they cover a wide range of topics – some light and some more academic.

In August, it started back up with a course on the meaning of different colors and what someone’s attraction to certain colors shows about his emotions and personality, Jean says. Last year’s offerings included a course on wine, which ended with a tour to a local winery, and a course on art appreciation, which Sandy tied in with a trip to the Erie Art Museum.

“The chatter on the bus on the way home was exhilarating for me to hear,” Sandy says. “And the great part of this is that it’s all done by residents. All I do is print the schedules when they ask me and put up announcements.”

“We can choose from history, philosophy, science, the arts, religion, you name it,” Jean says. “There are so many interesting courses it’s hard to choose.” She is helped in this regard by another resident, Fred Graf, who helps her review the choices and lectures and brings a different perspective to the process.

“He had been taking some of these courses on his own,” Jean explains, “so when I found out that we had a mutual interest, we decided to collaborate on choosing topics. And just the other day, I had an email from someone who lives in one of our Garden Homes who has been taking the courses on her own, too, so she’ll probably be hearing from me soon about joining our selection committee,” she laughs.