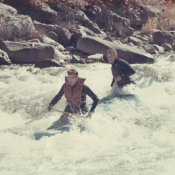 It’s not every Springhill resident who can boast having had cocktails with Bobby Kennedy. But if you know Bill Krajcovic, you know he doesn’t boast – and that you would have been far more likely to find him drinking canteen water after a day of white-water canoeing or hiking with his family.

Bill, like so many here, has a past that makes for fascinating conversations. While his outdoor activities have scaled back a bit, he and his wife, Marjorie, have great memories and children who still enjoy the priceless gift Bill gave to them – a love of the outdoors and a spirit of adventure.

Born five minutes from the Alleghany River, Bill learned how to swim in its waters and started canoeing when he was in elementary school.

“The river was a big part of my life as I grew up,” he says, reflecting on how he became so bound to the water. “I remember a steamboat going by when we were in our canoe and it would leave a trail of high waves and we would get the canoe in the middle of them and ride them out.”

In his 20s, Bill took a job as a deckhand on a steamboat travelling from Pittsburgh down to Cincinnati. “In a few days, I was the most senior deckhand on that boat because it was such hard work,” he laughs.

It suited him, and he decided to look into becoming a steamboat pilot. To gain experience, the 22-year-old decided to embark on an odyssey that is unfathomable to most people – navigating an aluminum canoe 1,300 miles from Pittsburgh to New Orleans. In the end, Bill decided not to pursue life as a steamboat captain, citing a high divorce rate in that profession. “I wanted a wife more than I wanted a boat,” he laughs. Instead, his love of the outdoors led him to start a window-cleaning business.

When Bill and Marjorie’s children were born, they couldn’t help but absorb Bill’s enthusiasm for action. When their boys were just 13 and 15, they spent several weeks walking the Pennsylvania section of the Appalachian Trail by themselves. “I went with them for the first four days, but then they were on their own,” Bill says.

And then there’s Bill’s second great adventure, supervising a rafting trip on the Hudson River for Sen. Robert Kennedy, the Secretary of the Interior and their families. A highly experienced white-water canoeist, Bill was recommended for the job, along with some fellow canoeists. “We had to admire Bobby Kennedy because he was in a kayak and he capsized three times and had the gumption to get back up again,” Bill says.
Plenty of people would use the same word to describe Bill.