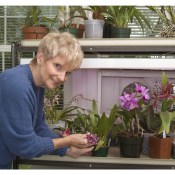 When Jean Metcalf moved to one of Springhill’s Garden Homes in 2004, she found herself confronting the dreaded task of downsizing faced by every new resident. Her task was doubly challenging, though, given that she had a lovingly cultivated collection of orchids compiled over several decades. And even though her new home has more than 1,600 square feet, filling it with 500 orchids didn’t seem like the wisest use of space.

If you have to get carried away with a hobby, there’s probably none that would create more beauty in your life than orchids.

Jean was bitten by the bug after a visit to her brother’s home in Naples, Fla. A day trip to the Naples Botanical Gardens happened to be timed during an orchid show. This was before the days when orchids had become fairly commonplace and available at every Lowe’s or Home Depot, Jean points out.

“They were so beautiful and so different from anything we had in this area,” she says. “I was so smitten I brought three of them home with me on the plane, which is pretty interesting when you have to get blooming plants through security,” she laughs.

When she returned home, Jean, who jokes that she “tends to obsess about some things,” contacted a local garden center to get advice on caring for her new charges. She was put in touch with a local orchid society. Shortly thereafter, she joined the American Orchid Society.

“It wasn’t long before I had built a greenhouse and had 500 plants and I was getting training in Michigan as an orchid judge,” she notes. In her 10 years as a judge, Jean traveled to shows all over the country and in Canada. A trip to Guatemala that was to take place just after 9-11 was canceled.

Her most treasured orchid was her pink Cattleya percivaliana. Over the years, it grew so large it had to be divided several times and would burst forth with 50 to 60 blooms at Christmas time.

It was one of the orchids Jean brought with her when she moved to Springhill. From 500, she winnowed her collection to about 150, giving away prized specimens to local orchid cultivators, friends and fellow judges.

Sadly, the Cattleya did not survive the transition. “It didn’t like the patio atmosphere,” says Jean, who has reduced her collection further since the move. “I used to really fret about keeping each plant alive, but now it’s pretty much survival of the fittest. If they like what I’m doing, great! If not, it gives me an excuse to buy a couple more!”

These days, she divides her energy between orchids and Springhill’s Writer’s Workshop. She joined it to begin writing her memoirs for her children because “I grew up in such a totally different time.” Since joining, though, she has begun writing poetry, a direction she credits to writing and discussions she has been exposed to in the workshop.

“I was a singer for many years, but lost some hearing and couldn’t match pitch anymore,” Jean says. “I had to find something creative to do and I heard about Marge’s group. It’s become a very good outlet for me. I’m learning something every session. And that’s what is so exciting as you get older – to find something new to learn about.”