Meet with downsizing experts at our event on Feb. 22 at 1pm 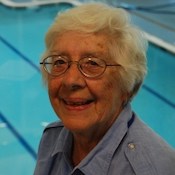 At 84, Dorothy Szymanski is committed to an annual quest that most people half her age can hardly fathom.  For the past two years she has been a resident as Asbury Solomons, Dorothy has completed 50 miles worth of laps in the community’s pool, continuing a passion for swimming she has had for almost as long she can remember.

“I learned to swim in the creek where our family had a cottage,” Dorothy recalls. When she was the mother of two young boys in Northeast Baltimore, they would escape summer’s stifling heat by heading to the local pool by lunch. There, Dorothy would bide her time until the whistle blew announcing adult swim.

Her 50-mile “compulsion” as she laughingly calls it, began in the 1970s when the Red Cross started a campaign for swimmers to record their mileage. Big charts were posted on the walls of swim clubs around Baltimore. From the time she penciled in her first quarter mile, Dorothy was hooked. “Usually, with everything I had going on, I was lucky to get in 20 or 30 miles,” she says. “But one year I actually did swim 50 miles over the course of a summer. There was something about that chart that made me competitive. I actually came in on a couple of rainy afternoons to finish, and it was just me and the lifeguard.”

Given Dorothy’s love of water, it’s no surprise that she was drawn to Asbury Solomons, an area she knew from when the couple’s son had attended nearby St. Mary’s College of Maryland. But the pool really put a gleam in her eye. Now she’s rededicated herself to meeting the 50-mile mark, which she celebrates completing by throwing a party for herself and fellow pool lovers. Though she’s proud of her record, she points out that there are probably several people in the community who swim just as far as she does, “but just aren’t as compulsive as I am about keeping track.”

Asked about her secret to successful aging, Dorothy points toward a need to stay involved in a community’s social fabric as well as getting physical activity. “It certainly helps to be physically well and to have a reason to get up in the morning,” she says.

To those who can’t imagine being in Dorothy’s shoes – or flippers – at her age, she says it’s really not that hard. “You just have to keep doing it with some consistency. I plan to keep going for as long as I can.” Dorothy’s spirit is a great example of what makes Asbury a great CCRC.