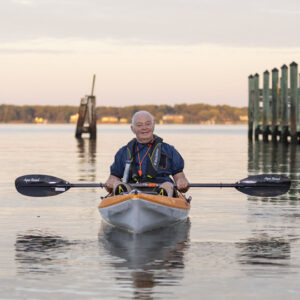 “I didn’t want to get to the end of my life and have many regrets,” says Harlan Higgins, who moved from Kentucky to an Asbury Solomons cottage with his partner Paul in 2020.

His thinking was shaped by listening to his father who put off opportunities saying to Harlan’s mother, “We will do that after I retire.” He died at age 57. It was a big reminder for Harlan that there is no guarantee of a tomorrow for any of us. With that in mind, Harlan has approached life with a certain gusto for living: “Live today, live it well, live it fully.”

A retired psychologist, Harlan’s resume includes a stint in the Navy as an aerographer’s mate, and a first career in the travel industry beginning with Pan American World Airways in New York. A second career began taking shape after reading an article about mid-life career changes. Its author, a man who left business to become a rabbi, resonated with Harlan. He realized he too needed a change in career.

Eight years later Harlan graduated from the University of Miami, Coral Gables, Fla., with a PhD in Psychology.  After brief stints working for managed care firms Harlan opted to establish a full-time private practice. He retired in December 2010.

Harlan and Paul had built their retirement home in Louisville, and Harlan set out to try to open a food co-op in his new community. Harlan was impressed with the co-op business model, but the venture did not come to fruition. “Big disappointment,” says Harlan. “Yet no regret because I gave it my all for nearly five years.”

Harlan’s career gusto is matched by his enthusiasm for off-the-clock activities that include travel, RVing, kayaking, gardening, reading, cooking, and a 10-year run as an adult competitive figure skater while living in Indianapolis. He and his skating partner Susan, who Harlan humbly says made him “look good,” competed and won numerous awards in ice dancing.

A major influence on Harlan’s life has been the love of the outdoors. He recalls hearing Nat King Cole’s rendition of “Nature Boy” and identifying with it. “The mystery and beauty of it all never ceases to amaze me,” says Harlan. His affinity for the original Americans and their traditions and spirituality led him to a 2006 class in Navajo rug weaving with Jennie Slick, a master weaver, which he describes as a “truly spiritual experience.” Life and work kept him from pursuing his interest in weaving until recently when he began learning tapestry weaving. He loves working with color and texture to communicate his experiences to others. Recently, Harlan exhibited a tapestry that now hangs in the couple’s office as part of the Asbury Solomons Resident Art Show.

Harlan’s journey to Asbury Solomons in Calvert County, Md., began as Paul and Harlan realized that home maintenance had become more burdensome and time consuming. They saw friends beginning to need assistance. Searching for a continuing care retirement community like Asbury Solomons seemed to make the most sense.

The couple wanted to be on the East Coast, live on the water, and be part of a community that included assisted living and skilled nursing onsite. And, as a same-sex couple, it was important to find a diverse and welcoming culture. As luck would have it, Harlan’s genealogical research into his Scottish roots had tracked down a fourth cousin who was a longtime Calvert County resident. When he checked in with her, she mentioned she had several friends who were residents of Asbury Solomons. It all seemed like serendipity.

In August 2020, Harlan and Paul moved into their 2-bedroom cottage just a short walk from the Patuxent River which provides a gorgeous backdrop to Asbury Solomons’ campus. Though their move came at the height of the COVID-19 pandemic and required a two-week quarantine, “neighbors came out of their cottages when we walked to the end of their sidewalks to welcome us,” Harlan notes. Post-quarantine, resident ambassadors helped familiarize Harlan and Paul with the lifestyle and offerings at their new community.

“People are so friendly and welcoming,” says Harlan. “And the natural setting is really soothing to the soul.”

An avid kayaker, Harlan makes the most of his waterfront setting. He and others interested in kayaking, launched a group named the A-S Kayakers/Paddlers. Harlan loves the convenience of heading out on the river right from the campus beach. Another big draw to the community were the amenities available to residents, including the pool and wellness center. Harlan lifts weights three times a week at the wellness center, logs a 2-mile walk each day, goes birdwatching, is an avid reader, and belongs the Go Green Committee and the Democratic Party Committee.

“Becoming involved in an activity opens the door for the beginnings of new friendships,” he says.

“This was such a smart move for us,” says Harlan. “There is far less stress in our lives.  Having time to do what you want to do is wonderful and not feeling guilty because you do not feel up to doing  all the work associated with homeownership.

The icing on the cake for Paul and Harlan was adding a black miniature poodle to their family.  Paul named him Pepper. Pepper takes both Harlan and Paul for nice long walks around the beautiful campus and “adds a certain liveliness to our cottage home,” says Harlan.