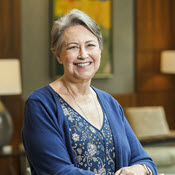 After more than 35 years in global health and international development, Sharon Rudy has traveled the globe and met her share of world health leaders.

While Dr. Anthony Fauci has millions of fans, few of those have worked with him as Sharon did in the 1980’s during the AIDS epidemic. It was during her career and travels to 70-plus countries, that Sharon also met Mother Teresa.

Recently retired from her role as Senior Global Health Director at the Public Health Institute, Sharon continues to consult on projects and leads her own coaching firm for global health leaders, TeamRudy – all from her new apartment at Asbury Methodist Village, where she moved in November of 2020.

“I fell in love with the campus,” Sharon says. “I wanted to retire in a university town and that’s what it feels like living here — from the mature trees to the spacious campus.

“And, I was so impressed with the community and felt very safe,” she says of her first visit during the height of the pandemic. “Everyone was wearing a mask and taking precautions, plus they were super-friendly.”

And after touring several apartments, Sharon landed on “the one.” She likens finding her Park View terrace apartment to the children’s fairy tale Goldilocks and the Three Bears: “It wasn’t too big. It wasn’t too small.… I almost cried when I found it,” she says of her “just right” home.

Her journey to Asbury was a quick one — just over three weeks after her initial tour of the community. Five years prior, looking to simplify her life, she had downsized and sold her large townhouse in Silver Spring and moved into a 350-square foot “tiny house” on wheels located on the property of a homeowner in Potomac.

Much of Sharon’s career involved creating health-behavior change in African countries and using her communication skills in creative ways. While working for Johns Hopkins in Tanzania, she produced the country’s most popular radio soap opera. Not only were the storylines compelling enough to bring in big ratings, but they also included messages about AIDS, family planning and more.

New direction for a new chapter

“I want to focus on learning, health and adventures,” says Sharon who estimates she’s traveled to or lived in 70 countries over the course of her life.

But in August of 2020, while recovering from knee replacement surgery and being basically debilitated by it, she felt it was time to find a place where she could age well.

“I decided to do my relatives a favor and make the decision before they had to do it for me,” says Sharon 70, who is single and has no children. “I felt like the universe was calling me to Asbury.”

Living at Asbury has also provided insight on how to make this new chapter in her life matter. Being around people with shared experiences has helped.

“Instead of giving up, it’s really about understanding what this time of life is about,” says Sharon. “Living here, you get help in figuring it out. It was a surprise to me. That is part of the culture of Asbury Methodist Village. This is a community of very aware, insightful, people.“