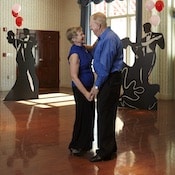 They say the key to happiness is to find something that moves you, and do it every day. That’s not a problem for David and Janet Lingrell, Asbury residents since 2005 and devoted dancers since their first date more than 50 years ago. For them, dancing isn’t just about having fun. It’s about staying active and healthy by doing something they both enjoy. And they’re not shy about sharing. The Tea Dances they help organized for other residents have instantly become a new Asbury tradition.

In fact, tthis year marks the fourth anniversary of the Tea Dances, where residents learn such new dances as waltzes, the fox trot and others. A resident who regularly attends the dances credits them with helping her recovery from meningitis a few years ago. At the time, she had lost significant brain function and had to learn to speak and read again, among other things. Thanks to her husband’s persistence and support, and the help of experts, the resident recovered, but her spouse believes that counting the dance steps and keeping time to the music also played a part in her recovery. “I’ve been dancing since I was in high school,” she says, “but my husband never has until now. He really loves it, so we attend most of the Tea Dances.”