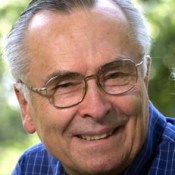 Many of you have enjoyed lectures by our celebrated Courtyard Homes resident George Stosur, now retired from government service. He is a thrice-appointed Distinguished Lecturer by an international engineering society and, counting other lectures including cruise ships, he has delivered nearly 300 lectures around the world. George holds two MS degrees and a Ph.D., and is currently serving as Associate Dean of the Keese School here at Asbury.

But how many of you know that he and his wife Roxanne are avid gardeners? Several Courtyard residents have been recipients of their largesse, including both flowers and vegetables. When one of our Asbury reporters went to thank them, she heard “the rest of the story.”

George was born in Poland, and as an ambitious student he pursued an advanced degree in Sweden. There he met Roxanne, an American graduate student. A romance blossomed and when he returned to Poland, and Roxanne returned to the U.S., they kept in touch. Roxanne soon returned to Europe, joining a student group headed to Poland. She reconnected with George and they were married a few years later in a wedding conducted entirely in Polish.

Today, Asbury is benefiting from several of George’s many talents—as President of the Computer Club, photographer, and lecturer. This fall he will be speaking as part of the Asbury Speakers Series. Mark your calendar to come out and hear what George has to say.