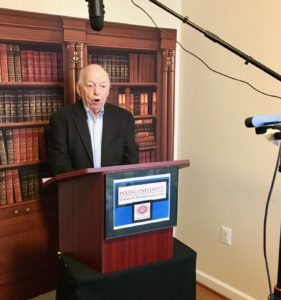 What do you do when you’re just weeks away from flying out for your annual teaching gig with students of the Transnational School of Law at Peking University – and a burgeoning global pandemic upends everything?

If you’re William Fox, you dismantle the flight simulator in your apartment den, get busy on YouTube and Amazon, and create a virtual classroom.

Bill has a long career in law, having taught at Catholic University, where he also served as Dean, University of Colorado, and Penn State University. In 2015, he was approached by a former colleague with a new adventure – teaching in China.

For the past four years, Bill and his wife, Pat, have spent extended periods of time in Shenzhen while Bill taught a variety of courses. In 2020, the plane tickets had been purchased and they were one month away from the semester’s start when the university suspended all on-campus learning.

“I had been watching the news, and was still set to go,” Bill says. “I thought I could be cautious and just go from classroom to hotel, but then the decision was taken out of our hands.”

Instead, he is now teaching 150 first-year students American Criminal Law in a course structured around the Timothy McVeigh case as an example of homicide law and the Bernie Madoff case for white-collar crime.

Just like millions of United States college students who came home for Spring Break and never returned, Bill’s students faced a similar situation in January. While home with their families celebrating Chinese New Year, they were told they would be learning online for the rest of the semester. China is not really set up for virtual learning in the same way the United States is, Bill notes, and one week before classes were due to start, the university still had not decided upon a platform. Now, the faculty is trying to figure out how they will hold cheat-proof final exams, he adds. “If there’s one thing I’ve learned, it’s that students, no matter where they are, will find a way to cheat if they can,” he laughs.

He records his lectures standing behind his customized podium, which includes a piece of his flight simulator and a lectern purchased from Amazon, with a professional boom mike and a backdrop of law books. The students, who are scattered all across China, watch via Zoom and participate in class discussions via email. Those discussions stick to course content, Bill notes, because veering into personal or news-related topics raises concerns about government surveillance.

Despite the long-distance challenges, the students “love the class,” Bill says. “They’re very savvy about what’s going on in the United States. During a class I taught on legislative drafting one year, a student asked me something about Senate filibuster procedure that I had to go research. I didn’t know the answer.

“It’s not perfect, and it will never be a full substitute for face-to-face education, but we’re making it work,” he says.

And while you might think the less-structured nature of online learning might lend itself to relaxed standards, Bill continues to teach wearing a coat and tie.

“I told them it’s very important that they see me just the way they would in the classroom,” Bill says. “My strong preference is to be with them in person, but given what we are all dealing with, this is okay. I’m looking forward to when all of this is finished, though, and I can get back there.”