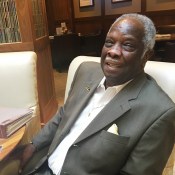 He’s never been a teacher, yet Fred Brown has helped shape the future of thousands of students across the United States.

Through his work with the National Institutes of Health, the Fabco, Inc., biotech firm he founded post-retirement, and as the president of his college’s alumni foundation, Fred has spent decades working to increase the presence of minorities in the science and research fields.

“I was fortunate to be in a position to do something,” Fred says. “Everybody is in this world to do something good, everybody has a talent and you’ve got to use it.”

Teachers, MLK were formative role models
Fred traces the roots of his desire to give back to two formative experiences in his life.

As a child, Fred recalls teachers boarding with his family on their South Carolina farm. “Even though my parents didn’t have more than a high school education, they showed us that there was a benefit to continuing your schooling,” Fred says. “The teachers would talk to us about college, and along with my parents, they motivated us to try for that.”

Fast forward to the 1950s. Fred had graduated from Allen University in Columbia, S.C., and was attending mortuary school in Atlanta, Ga., while working in a funeral home during the evenings. It was, Fred says with a laugh, a quiet place to study.

Life didn’t stay quiet for long. Dr. Martin Luther King’s family home and Ebenezer Baptist Church was not far from the funeral home. Fred’s employer told him that Dr. King was looking for drivers. Fred’s access to the funeral home’s limousine and ambulance made him a natural.

Fred’s interactions with King and others in the civil rights movement were a second formative experience in his life.

“With his gifts, Martin Luther King could have done anything; he could have made a lot of money,” Fred says. “But he knew in his heart that he had a higher purpose, that life is about helping people. After seeing his commitment, it changed me.”

Leader in bringing diversity to NIH
Fred continued his schooling, eventually joining the National Institutes of Health (NIH) as a research scientist and a member of an epidemiology team. While there, he became aware of an NIH push to increase its rate of diversity among research staff.

“My affiliation with the early civil rights movement made me understand that when you see an opportunity to make a difference on the ground level, you need to take that opportunity,” Fred says.

He became a key figure in what eventually became known as the NIH Minority Student Faculty Partnership Program, recruiting African-American students from colleges and teachers from the D.C. Metro area to attend week-long graduate level research internships. In addition, he recruited and mentored students at NIH’s Saturday Science Academy.

Continuing mentorship at Asbury
Now 84, Fred moved to Asbury Methodist Village in 2016, and became aware of the Gaithersburg Beloved Community Initiative, a minority youth outreach program founded and run by Asbury residents. He is planning to continue his work introducing GBCI students to biotech research.

“I believe in taking the opportunity to make a difference where you find it,” Fred says. “By being the right person at the right time you might not save the world, but you can save a group.”