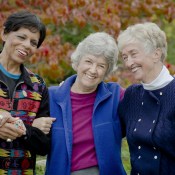 When Villas resident Ruth Anne Thran saw an advertisement posted by a choral group at Asbury Methodist Village for a People to People Cultural Exchange to Cuba, she was the first one to sign up for the trip.

Below, she shares her reflections from her journey, which began just three weeks after President Obama’s announcement that the United States would resume diplomatic relations with the country.

December 17 is the date that will be remembered with joy in Cuba as the day when, not if, their dreams came true. The Cuban people feel their lives are about to take a welcome and long sought leap into the future.The announcement opened a floodgate of optimism that no talk of caution could stem.

December 17 is also the celebration of the Cuban festival of St. Lazarus Day, which combines customs of both the Catholic ,Yoruba, and other African religions. The celebratory bonfires were built before the announcement, but people spoke of how much bigger and brighter they were as if in preparation for the added excitement.

The people we met with described how under Raul Castro’s leadership, daily lives have been changing rapidly. Although everyone had been given a home after the revolution, now people have permission to sell or lease that home and their land. New laws allowing people to operate food services in their homes have been enacted, and in the last three years, 320 new privately owned restaurants opened in Havana. Small electrical appliances are available for purchase in response to consumers’ demands. The government said OK, if you want these things you will have to pay a higher rate for electricity to encourage conservation. This welcome change is visible in all the houses we visited.

Our visit was filled with people-to-people exchanges every day: the coffee farmer, the cigarette lighter repairman, the Santeria festival queen, the street entertainer with a trained dog, the fishermen, the artists.

To each encounter we brought bags of gifts, things that for us were easily obtained in the United States but very special to Cubans: spices, toiletries, over-the-counter medicines like Ben Gay, makeup, and granola bars.

Our visit emphasized the art, music and dance of Cuba. The dance group we visited traveled to Washington, D.C., on March 1 to perform their newly created work at The Dance Place. We visited with artists in both Cienfuegos and Trinidad who have formed organizations to encourage primary school children to learn drawing, painting, crafts, dancing, theater and music as after-school activities. If the children display a talent they are encouraged to apply to the special schools for the arts. One of our speakers, from the autonomous, non-profit Ludwig Foundation, told us Cuba is not an island but a port of cultures. Cubans continue to merge their European, African, and American heritages and are looking forward to the future.