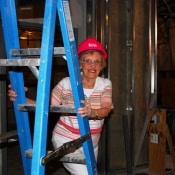 At 90 years old, Edith Isacke is a veritable poster child for the rewards of a life well”ness” lived.

Each fall the Penn State fan heads to Beaver Stadium for home games, tailgating with her children before hiking up to their seats in the 50th tier.

Several years ago, she convinced two new residents to join with her in what is now called Diamonds in the Rough, a flute trio with guitar and piano, that performs monthly around the Asbury Methodist Village campus.

She walks a mile and a half each day and attends three fitness classes per week, working to build back up to the three mile walks she took before fracturing her hip last year.

Her bridge group meets weekly, and each Saturday, she and a group of friends head to Asbury’s Blue Note Bistro for lunch.

Last, but certainly not least, Edith serves as secretary of the Asbury Guild, a charitable organization run by residents that hosts and raises funds for various events and projects on campus, and as secretary of the Future Projects Partnership Advisory Committee (PAC), where residents work with administration on campus enhancement and planning.

It is this last area that has kept Edith the busiest lately. Four years ago, she was chairman of the Diamond Residents’ Council when planning got underway for renovations of her building’s lobby and common spaces. Before long, she found herself chairman of a resident committee working in conjunction with architects on that project and, eventually, enhancements to the Hefner Community Center.

“It’s been a lot of work, but also a lot of fun, especially working with the decorators,” Edith says. “Right now, my apartment has a big notebook full of carpet, paint and artwork samples.”

As the former director of a Career Tech Center that included programs in construction and interior design, Edith was already somewhat familiar with these processes. She has been very pleased to not only see residents’ input sought out but followed – including making changes to carpeting, paint colors and artwork.

She is pictured above right at the Blue Note Bistro, which was part of the Hefner Community Center enhancements. In September, she and Diamonds in the Rough performed as part of the Bistro’s Chamber Music Series.

Her special designation and commitment was noted with the gift of a bright pink hard hat that she wears when meeting with contractors and project managers on site.

Edith celebrated her 90th birthday on September 8th tailgating with her family at one of her beloved Penn State games. And yes, they brought a birthday cake, just as they did when celebrating her 80th one decade ago.

“I try to keep people moving,” Edith says, who is a former member of Asbury’s Wellness PAC. “It really does make a difference in your life and abilities.”