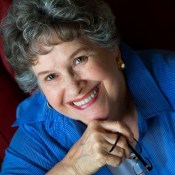 It’s the rare octogenarian who has higher name recognition among today’s youth than she does among her peers, but that just might be the case with Phyllis Naylor. The author of more than 140 books for young adults – including the Newbery Medal-winning Shiloh – Phyllis has managed to keep her finger solidly on the pulse of childhood and adolescent concerns for four decades.

She may be best known for her Alice series, which has chronicled the life of its main character through 30 years and 30 books. In 2014, Phyllis ended the series, which began in 1985.

Although plenty of Asbury residents have day planners that look busier than the typical “working” person, Phyllis is different in the sense that she has never officially retired. She has been quoted as saying that she will continue writing as long as she can hold a pencil. In fact, the decision to end the Alice series was partially attributed to her desire to spend more time developing new ideas and characters in a 2014 Washington Post feature.

Around Asbury, Phyllis is known more for her human qualities than for her writing skills. Says fellow Trott Apartment resident Harriet Renison: “Phyllis Naylor is an inspiration to all of us as a nationally-known children’s author for her discipline in plying her trade with such success. However, she is also an outstanding example of helping the Asbury community by organizing and promoting resident gatherings in the Trott Apartments that include watching major sports events in our “clubroom,” Trivial Pursuit, spelling bees and games of Balderdash. She put her creativity to work when she wrote and directed Campus Capers with a large cast of Asbury residents in 2010. But more importantly, countless examples come to mind of times when she has given personal attention and support to those during stressful events or periods. “